CRC DRESSAGE is a popular and innovative alternative to established competition riding. It is a very good preparation for people who wish to go on towards affiliated test riding at a later stage. The CRC system was devised in 1998 by Sylvia with the help and approval of many establishment figures in the dressage world who wanted a more horse-friendly approach. It was important to attract owners of horses and ponies of all types, shape and size and not to penalise those whose gaits may differ from the "perfect dressage type".

CRC Dressage is being used in several different countries and is particularly popular with riding clubs, breed societies and supporters of Mountain and Moorland, Cobs, Iberian breeds, Friesians, Arabs, TBs, etc. It was primarily designed for levels up to and including Elementary to encourage better riding practice overall.

The main object was to put the emphasis back on HOW the test was ridden with slightly less emphasis on accuracy – which has its own mark elsewhere. For example – If the circle is ridden with the horse nicely bent and flowing – even if just short of the required diameter – or slightly before or after the marker – this would be considered a less serious fault than an accurate circle starting on the marker with the horse resistant or over-bent.

A big difference in the CRC Tests is the proportion of marks awarded to the rider. The latter are sub-divided into a separate mark out of 10 for General Position and Balance; Correct Use of Seat and Legs; Correct Use of Hands. This section – carrying a co-efficient of 1.5 has made a great impact on many competitors. It teaches them that how they ride each movement is as important as the movement itself and how over-aiding is not encouraged.

Instead of marking movement by movement, judges must assess the whole picture. A separate mark is awarded for the quality of the Walk, Trot and Canter – particular attention being given to freedom, elasticity, rhythm and regularity. Stilted movement will be marked down whilst Walk on a Long Rein has a separate mark.

These are broken down into sections - Responsiveness & Attentiveness; Correct Contact – (e.g. poll the highest point, no leaning etc); Straightness & Correct Alignment on Curved Lines; Forwardness in Correct Rhythm; Balance & Engagement; Over-all Suppleness & Freedom through the Back; Quality of Transitions. These marks give clear guidelines to riders as to what aspects to improve. 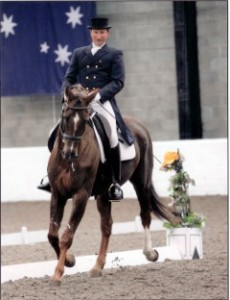 Francis Peto has been a long term supporter of the Classical Riding Club. He and his wife started their dressage career with the CRC tests before graduating to BD at the highest levels.

The whole essence of the CRC mark system allows horses to be judged independently of what breed or size they are.  One standard is applied to all as emphasized in our CRC judge training system.

CRC Rules and Recommended Practices can be ordered on line.   Permitted dress, tack and particularly bitting is addressed; some bits such as the Pelham being allowed (but with 2 points deducted).  Bitless bridles are accepted.   Ultimately more freedom is handed back to the rider under the CRC system – and much is done to promote the ease and comfort of the horse both through our Rules and the Tests themselves.

For further details on the whole system of CRC Dressage and how and why it came about – we recommend our booklet CRC Training Tests and Judging System available to download from our Shop (Click here to go to Shop).

To conclude, the CRC system of marking allows the judge far greater freedom to award very different marks for strengths and weaknesses.  This allows the rider to know where to improve, what aspects to work on and encourages them to go for the highest mark possible in their own abilities – whatever their breed of horse.